Dissection of a Painting: "Hi Dive" 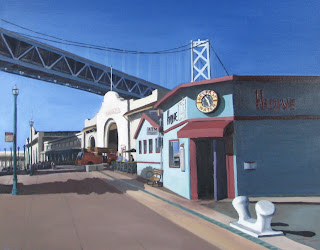 I chose this subject for its compositional elements, which is typical for me. My paintings tend to be driven by compositional elements rather than subject or color. What I liked about this one in particular was how the viewer can enter from several points but will eventually circle around the central elements of the buildings in the foreground and mid ground. 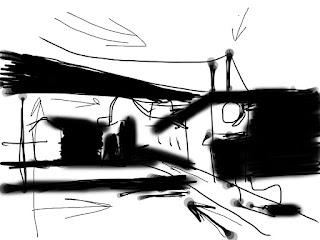 in this drawing I used arrows and dark blocks to highlight the directions of flow. I made this sketch on my iPad mini using the ART SET app. it works pretty well for drawing but I haven't got the hang of it for painting. I think I'm still an old school painting who likes the feel of the brush and the paints. All in all a handy tool for dissecting a potential painting. 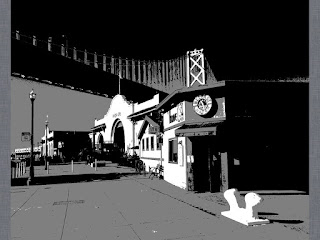 The other tool I used on my iPad is Value Viewer. It will transform your picture into a grayscale image of two or more values which is helpful for me to see what kind of patterns do the darks and lights make. seeing these patterns allows me to make some adjustments that can help improve the flow of the piece. In the final piece I lightened the background sky under the bridge deck which allowed the lamp post to stand out more which would bring the viewers along the street and the roof line and up the post to the bridge deck and back towards the center. I kept the white cleat in the foreground bright to work as a starting point followed by the Bar door which is very dark. At this point the viewer can go along the perspective lines of the street or up to the clock and bridge then over along the cables, down to the lamp post and along the shadows to the buildings.

Details, details, details
Bridges can be a real challenge to paint or draw. Because of their size they tend to dominate a landscape. Bridges also have a lot of visual interest with the repeating shapes and repetition of patterns. The challenge comes in how to put it into a composition so it works with or works into the flow of the other parts of the picture. If an artist wants to use the bridge as the focal point then its easy to emphasize all those features. If you only want it to stay in the background then one needs to deemphasize all the details. I have done several paintings with the bridge and have left off the cables because I felt they were distracting to the flow of the composition. In Hi Dive I chose to put some of the details in but down played them so they were not overwhelming to the composition.

The cables on the bridge were a challenge. As a cluster they show up pretty light but I didn't want them to be so distracting at the same time. There was also a pattern to their arraignment. I felt that I couldn't paint the cables properly with a brush without making them bulky and distracting. I wanted them expressed as very thin lines so I used an oil based color pencil to achieve that effect.

The underside of the bridge deck was another challenge. In the Value image it shows up like a dark mass across the sky which would throw off the composition.  Bridges in general have lots of patterns and repetition of shapes. That can be cool and interesting but it can also dominate a picture because we tend to focus on patterns. I chose to express the girders but downplay the value contrast. Doing so adds interest to the shadow side of the bridge deck by making the shadows interesting without being a distraction or scene stealer as well as fitting into the composition.

"Hi Dive" will be on display and available for purchase at Valley Art Gallery until May14th, 2016
Posted by Soenke Fine Art at 3:15 PM No comments:

I was looking over some of my artwork recently and noticed that besides my better known subject matter of cityscapes I have a fancy for fence posts. Well whats not to love about something old and weathered sitting out a field usually with some old rusty barbed wire nailed into it and maybe my favorite thing is how ranchers and farmers never seem to take out the old nails and just tack on some new ones so the posts can become littered with old nail and bits of old barbed wire. If the post has been there for a while then it is often times leaning to one side or another due to the ground giving way under it. Perhaps I'm a romantic but I look at  them the way other people may view and old tractor or farm equipment sitting off to the side slowly rusting away having done its job long ago and is now just there for better or worse. I don't know if farmers are  being nostalgic for leaving the old tractor sit there unwilling to let go of a beloved piece of equipment or are they being artistic knowing how other people love to see old farm equipment rusting in a field. Regardless of why farmers do what they do I enjoy finding fence posts doing or trying to do what they where put there for to do and that is to hold a line, to mark a boundary, to keep animals in an area. Here in the Mt. Diablo foot hills area where I do my walking there are areas for cattle to graze and since the area has hills and the rain can be heavy the ground can move or gets washed away which requires ranchers to go out and do fence maintenance. It brings me back to my childhood farm in central Pennsylvania. Fence maintenance was something that had to be done regularly. Back there it would usually be a branch falling on the fence that would nock it down and then the cows would escape and we would have to go find them and bring them back in and fix the fence. My walks here in the Mt. Diablo hills along the fences brings me back to those days on the farm.


Posted by Soenke Fine Art at 2:59 PM No comments: